This historic town is 47 klilometres west of Maryborough and the area around Brooweena was first settled in 1849 during a period when land in the Wide Bay area was subject to a rather frenetic land grab.

It was the arrival of the railway line which helped create a settlement at Brooweena. The railway station, which was opened in 1889, was called Teebar but the name was changed the following year to Brooweena, which possibly means ‘crab’ or ‘crayfish’ in the language of the local aborigines.

As early as 1892 there was a butcher’s shop to supply the railway workers. Shortly afterwards the first residence, appropriately the stationmaster’s cottage, was built.

One event that was to ensure the town’s continuing existence, came in 1924 when Talbot Lahey built the local sawmill. The sawmill closed in 2013.

The Brooweena cemetery is in a churchyard, amid pasture lands, a few kilometres further west of the town at the top of a hill on the left. There is a small wooden church on the reserve with a unique bell.

The Brooweena Historical Village is in the centre of the town and has an extensive array of memorabilia, equipment, musical instruments and aboriginal rock carvings. 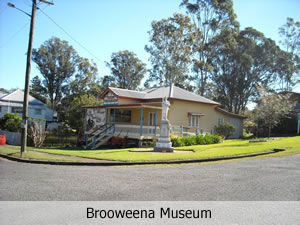